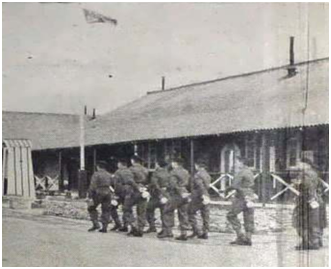 During the early hours of Sunday 16 February 1958, the Irish Republican Army (IRA) raided Blandford Camp. Brandishing revolvers, masked raiders shot a soldier and overpowered seven others. During the attack, the men were heard to shout, ‘this is with the compliments of the IRA.’ Despite this, the raiders appeared concerned about the young soldier shot in the stomach. They intended to raid the armoury for arms but were unsuccessful.

The IRA assault on Blandford Camp was probably an inside job. Frank Skuse was a young Royal Electrical & Mechanical Engineers (REME) corporal. His home was in County Cork. A man answering Skuse’s description had hired accommodation in a country house at Charlton Marshall. When the police forced entry they found ammunition, weapons and three suits of battledress with REME shoulder flashes. Two weeks after the attack, a tommy-gun, small arms and ammunition were discovered in a converted bus parked in a Bournemouth caravan park. Frank Skuse had hired the bus.

On February 19, 1958, the Belfast Telegraph reported an IRA statement.

‘We have been asked to state that all volunteers who participated in the raid on Blandford military camp on February 16 have been safely accounted for. Six Irish freedom fighters entered the British military base at 1.30a.m. on February 16 and seized the magazine guard. They held the camp, which contained British soldiers, for half an hour and then withdrew after an alarm had been raised.’

In March 1961, the Irish Press reported a claim by Skuse that he had  led the raid on Blandford Camp and was also involved in a raid on another REME army camp at Arborfield. One of the Arborfield raiders was wearing a REME uniform.

Frank Skuse emigrated to the USA and ran an Irish pub in New York. National Archives at Kew hold a file entitled ‘Frank D Skuse’. Access is not permitted before January 2041. He had joined the British Army in 1952. However his service was twofold - he was also a member of the IRA and had supplied intelligence for the raid on Arborfield Barracks which had taken place in 1952.

In New York in 1973, he admitted the British had a suspicion of his involvement in the Arborfield attack and had transferred him to Blandford where he had kept in touch with the IRA. He said again that he had supplied intelligence for the Blandford raid and had taken part in it.

Frank Skuse died in his adopted home of New York on the 20th November 2022. (Irish Central)

(Illustration: Blandford Camp in the 1950s)