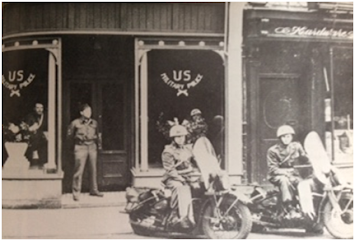 In the latter years of the Second World War, Blandford Camp was occupied by the U.S. Army. While Langton House, now demolished, became the base of the 1st United States Infantry Division.

In preparation for the 1944 Normandy Landings, part of Blandford Camp was transformed into a major U.S. Army Hospital complex. It was to be known as the ‘22nd General Hospital’. The site was converted from a British Army training camp to a hospital containing wards, operating theatres and medical stores. While the hospital was being constructed, Blandford Camp was also used as a parking zone for tanks and vehicles awaiting the Normandy invasion. This area was well camouflaged and protected by anti-aircraft guns.

American Army medical staff arrived in Liverpool in April 1944 and travelled on to Blandford by train. There were five hospital units set up which each had 1,248 beds. They started receiving patients about two weeks after ‘D Day’ (6th June 1944). Many casualties were flown into the wartime airfield at Tarrant Rushton from the Continent. As many as 500 casualties arrived in a single night.  During its existence, it is reckoned the U.S. Army Hospital at Blandford Camp cared for around 19,500 American casualties. Among the Hospital visitors were General, later to be U.S. President, Dwight Eisenhower, the Duchess of Kent and British born, American comedian Bob Hope. Roosevelt Park was opened at Blandford Camp in May 1945 dedicated to the work carried out there by U.S. Army medical staff and also to the US servicemen who had lost their lives. As a local newspaper reported at the time:

One corner of an English field became America yesterday to the memory of the 150,000 men of the US who gave their lives to help win the War.’

U.S. medical personnel left Blandford Camp at the end of the War many returning to the U.S.A. in October 1945 on the British transatlantic liner, SS Queen Mary.