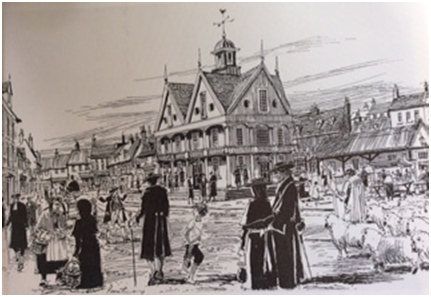 In 1669, to meet a shortage of small change, Blandford issued its own farthing coinage.

To celebrate the Duke of Tuscany, Cosmo III passing through the town, the church bells were rung.

In 1673, Blandford called in all tokens to the value of a farthing amounting to two pounds and eighteen shillings (£2.90p).

In 1680, Edward Wake died at Charlton Marshall. He ‘suffered greatly’ in the service of the King. He was shot in the head by the Governor of Wareham, poisoned in another garrison, imprisoned about twenty times and was also sentenced to death two or three times.

In 1688, hundreds of pounds changed hands when members of the local gentry met up regularly for Saturday lunch and gambling sessions in a Blandford Inn.

In 1690, Thomas Cox, the son of a Blandford gentleman, after a long history of crime was executed at Tyburn in London. On his way to the gallows he kicked both the hangman and the parson out of his cart.

In 1691, Jack Withrington, another notorious Blandford highwayman, was hung at Tyburn. It is said his four elder brothers also ended their lives at the scaffold.

In 1698, all houses with more than ten windows had to pay a window tax.

(Illustration: Blandford in the 1600s)