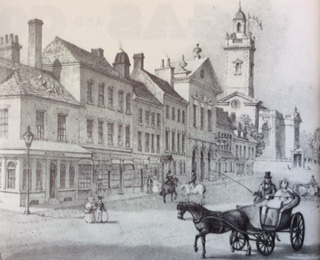 In 1706, villagers of Shapwick were terrified by a large crab that had fallen from a fishmonger’s barrel believing it to be a monster.

In 1712, Nathaniel Seagar a brewer was attacked and robbed while travelling between Shaftesbury and Blandford. Upon hearing what had happened Joseph Reader, a stocky built miller, pursued the highwayman and felled him with his cudgel. Summarily concluding the highwayman was guilty of assault, Reader proceeded to hang the highwayman from a nearby tree.

In 1713, East Street was burnt down, allegedly by a malicious person.

In 1723, Daniel Defoe, author of Robinson Crusoe and Moll Flanders, visited Dorset. He described lace made in Blandford as ‘so exquisitely fine as I think I never saw better in Flanders.’

In 1724, a troop of Hussars was stationed on Blandford Down, now Blandford Camp, engaged on anti-smuggling duties.

In 1728, Blandford’s Overseers of the Poor accounts show five shillings (25p) was paid to a poor woman heavy with child to go away.

In 1729, horse racing was held on Blandford Down.

In 1730, located where Blandford Cemetery is today, a maze, known as the Pimperne Miz-Maze, was ploughed up by a local farmer.

In 1731, Lord Chief Baron Pengelty, Sir James Sheppard, and John Pigot the High Sheriff of                 Dorset died at Blandford of the ‘infected stench’ brought with the prisoners from Ilchester Jail.