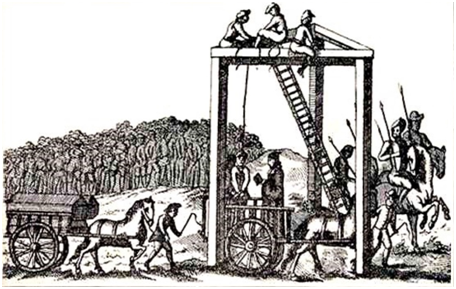 Tom Cox, the son of a Blandford gentleman, was known as the ‘handsome highwayman.’ With a colourful life, his story had all the ingredients for a Hollywood adventure film.

When his father died he was left some money which he soon squandered. So to fund his high living lifestyle, he took up highway robbery. Near Shepton Mallet, he met Killigrew who was the court jester to King Charles II. Killigrew had been given licence by the King to mock and revile even the most prominent in the land without penalty. Nevertheless, Tom ordered Killigrew to ‘stand and deliver.’ ‘You must be joking’ was the jester’s reply to which Tom retorted:

‘Nay, I am in earnest for though you live by jesting, I cannot. So deliver your money before a brace of balls makes the sun shine through your body!’

Three times in Gloucester, Winchester and Worcester, Tom Cox was tried for highway robbery. Thanks to his charm and silver tongue, he was acquitted. A moneyed lady in Worcester was so besotted that she married him. However, within two years he had not only broken her heart but also spent all her money.

When imprisoned in Ilchester for a failed robbery in Chard, Tom managed to escape and rob his drunken jailer of his silver tankard. Making his way to Coventry, two highwaymen tried to rob him. Tom robbed them of £120 which they had stolen the day before and killed one of them.

On another occasion he met Madame Box, described as a lady of ill-repute, and between the two there was much ill-feeling. When Tom ordered her to ‘stand and deliver’, she cursedly point blank refused to do so. Much offended by her vitriolic response, he ordered her to strip naked reminding her that just as she came into the world naked, so she might leave it. Tom took her money and left Madame Box just standing there.

Travelling in West Sussex, Tom met Mr Hiscock, a dishonest London attorney. When ordered to ‘stand and deliver’ the lawyer explained at length, in a fawning manner, why he should be allowed to keep what he had and continue on his way. Angered by this response, Tom responded with a Latin phrase, with which he knew the lawyer would be familiar, Quietus est. (a metaphor used by Shakespeare for the termination of life.) The dishonest lawyer handed over a purse containing £350 guineas and Tom allowed him on his way permitting him to retain just one guinea. Hiscock returned to London with the intent to recover his losses in the fees to be charged to future clients.

Tom’s last victim was a farmer named Thomas Boucher. Unfortunately for the Blandford born highwayman, during a London trip, Boucher spotted Cox in Essex Street, just off the Strand, and he was arrested. Tom Cox was sentenced to death for the robbery of Boucher and hanged at Tyburn in London on 12 September 1690. He was only 25 years old.

On the way to the gallows, prison chaplain Samuel Smith asked Tom if he wished to say a prayer. Spiritedly as usual, Tom responded by kicking both the clergyman and his hangman off the cart taking them to the gallows.