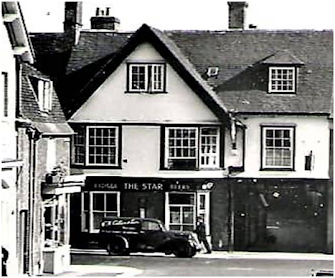 At one time there were around 20 pubs in Blandford including the Star, East Street - right next to Charlie Collier, the butcher's shop. Some of the town’s pubs, inns & hostelries were/are the:

Badger – at the junction of Park Road and Salisbury Road, built in 1899.

Black Bear – in Salisbury Street. A local clergyman bought this pub and converted it into Coffee Rooms.

Blue Boar – in East Street. This once belonged to Marston’s Dolphin Brewery in Poole.

Castle - in Bryanston Street. Formerly the Black Dog, It was owned in turn by Durweston brewer, Godwins, then Hall & Woodhouse and finally by Blandford brewer, John Lewis Marsh.

Crown – Has been on this site since the 1630s but had to be rebuilt after the 1731 fire. Winston Churchill dined here in 1915. Bought in 1931 by Hall & Woodhouse for £14,000 and during World War Two was hit by a German incendiary device during an air raid on Blandford.

Damory Oak  – in Damory Court Street. During the 1600s nearby, an old man sold ale from a hollow oak tree known as the Damory Oak.

Dolphin - in East Street. Formerly the White Hart. In 1821, public Robert Wilson was fined ten shillings (50p) and deprived of his licence for three years for allowing tippling in his public house during Sunday Church Service.

Fleur de Lis – in East Street. Owned at one time by Durweston based brewers, Godwins.

Greyhound – in the Market Place. One of the three great inns of Blandford, the others being the Crown and the Red Lion.  The Greyhound and the Crown were once owned by Robert Eyers who conducted the Blandford Town Band when they won the National Band Championship in London. During the 1831 Blandford Riots, its windows were broken.

Half Moon – in White Cliff Mill Street. Originally made from two cottages.

Kings Arms – at corner of Bryanston Street and White Cliff Mill Street. Great Fire of Blandford began here in 1731. Owned by John Lewis Marsh who opened a brewery next door in Bryanston Street. Marsh claimed if you drank his beer you could live for ever!

Railway Tavern – in Oakfield Street. Built in 1865 by Durweston brewer, Charles Godwin after the railway arrived in Blandford.

Red Lion – in the Market Place. Once had extensive stabling, a granary and its own brewery. Bought by Hall & Woodhouse in 1895.

Rising Sun - in East Street. Previously known as the Shoulder of Mutton and the Antelope.

Star – in East Street. Previously known as the White Bear and once described as ‘a most horrible ale house.’  In its White Bear days, it staged cockerel fights between the gentlemen of Dorset & Wiltshire. Renamed the Star around 1842.

Sword & Dagger - A 'cudgel playing contest' was held here in July 1752 with a two guinea prize 'to the man that breaks most heads and saves his own!'

And not turning a Nelsonian blind eye to Nelsons!