'Only Here for the Beer!' 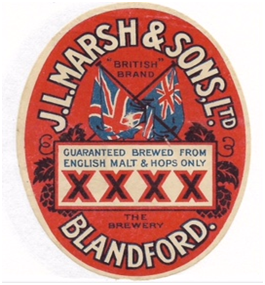 Blandford has always been associated with brewing beer. With iconic brands, both ancient and modern such as Tanglefoot and Stingo, Badger Beers come immediately to mind.  Yet, there have been local brewers other than Hall & Woodhouse.

John Lewis Marsh was not an upmarket department store but the owner of a brewery based in Bryanston Street. Marsh was a Londoner, born in Clerkenwell and the landlord of the Kings Arms in White Cliff Mill Street, who diversified into brewing. The business traded successfully for half a century until it closed in 1938. Marsh was keen on advertising. However, he was aware not everyone in the town was an admirer of his products. There were those Blandford folk who believed in alcoholic abstinence and that its excesses undermined and damaged family life. So Marsh produced an advertisement claiming that excessive tea drinking was ‘more harmful than malt and hop beers in moderation.’ The publicity also quoted former Prime Minister, William Ewart Gladstone who claimed ‘bitter beer was a divine drink.’

Perhaps, John Lewis Marsh was all too conscious that the Dorset & Southern Counties Temperance Association and Band of Hope had been formed in Blandford in 1863 dedicated to denounce the evils of the ‘demon drink’. Ironically also, and directly opposite Marsh’s Kings Arms public house, was the Salisbury Temperance Hotel which belonged to Blandford businessman, Thomas Hammond. John Lewis Marsh died in Blandford in February 1921.

In the nineteenth century, Henry and William Godwin ran a brewery in Durweston with a workforce of sixteen. The business had been founded by the Godwin family in 1753 with owner Richard Godwin listed as a yeoman and brewer in the early 19th century.  After a brew, employee Henry Martin would bring the Durweston beer into Blandford for sale on his horse and cart. The Western Gazette of 21 June 1867 reported:

‘Messrs Godwin Brothers of this village very kindly gave the whole of the men in their employ a treat to the Bath & West Show in Salisbury. Part went on Thursday and the rest on Friday, all expenses paid by the employers.’

When co-owner Henry Godwin retired in 1898 the business, with 26 public houses, was sold to Hall & Woodhouse. Godwin’s public houses included the Antelope, Half Moon and Fleur-de-Lys in Blandford together with inns in Tisbury and Wimborne.

Hector’s Brewery which had been owned by John Hector and then traded as Neame & Trew came to an unfortunate demise. Located in Blandford St Mary, the brewery was bought with twelve houses by Hall & Woodhouse in 1882. By the end of the century, it had become a very old structure and was built principally of wood. A fire broke out caused by the overheating of a defective flu and the fire spread rapidly such that the building and much of its equipment were destroyed. Almost the entire population of Blandford turned out to view the conflagration and many others journeyed in from the local villages.

A local paper was pleased to report that despite the large crowd there was no thieving - apart from a few apples from Mr Woodhouse’s garden!