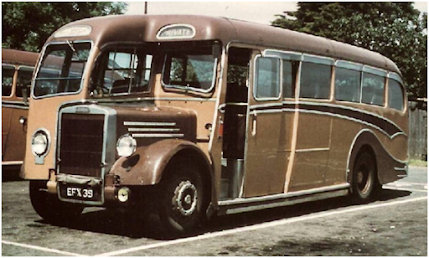 Bere Regis & District Motor Services was a privately owned company that operated between 1929 and 1995. Its brown coloured coaches, known as the ‘Brown Bombers’ were a familiar sight around Blandford for many years. From its depot in East Street, the company offered its bargain basement-priced coach trips.

Mystery tours were a popular Bere Regis speciality when customers would be taken to an unknown destination by a route that was designed to confuse. The aim was to leave the passenger’s discovery of the journey’s end to as late in the trip as possible. A lady from Blandford, who worked as a glove maker, decided to take a well-earned week’s holiday in Bournemouth. As a treat, she booked herself on a Bere Regis mystery tour. After a circuitous journey along Dorset’s highways and byways she finally realised her day’s treat involved a trip back to her home town of Blandford. So, she returned to her home in Victoria Road, ate her tea, then rejoined her Bere Regis coach and returned to continue her holiday in Bournemouth.

Largely by acquisition, the company grew to be one of the largest of its type in the county. Businesses acquired included Winterbourne Stickland based Lewis Sprackling together with others in Marnhull, Milton Abbas and Hazelbury Bryan. Bere Regis & District also operated a number of scheduled services. In 1949, the company operated some 49 such scheduled routes. These included Blandford-Milton Abbas, Blandford-Stickland & Blandford-Okeford Fitzpaine. During the post war period, there was a large number of National Service conscripts at Blandford Camp. So, weekend services to the Midlands and the North were a lucrative business for the company.

Bere Regis coach trips were remarkably low priced. For example, a trip to London would dramatically undercut the cost of an equivalent rail ticket at a time when trains were far less expensive than they are today. To offer its basement prices, and to maintain a viable business model, the company had to ruthlessly control its costs. Immediately after the war in London, drivers would seek out a bomb site to park rather than have to pay parking charges. Wages paid to the drivers were low and they would hope to make up their money through generous tips. Second hand vehicles were bought by the company and run into the ground so there was always the risk of a breakdown to add to a mystery tour’s excitement. Climbing a steep hill near Abbotsbury could be stressful for both the driver and the passengers. Such mishaps led to the company being given the nickname ‘Bere Regis & Risket.’