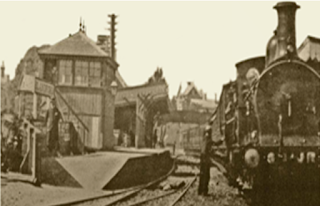 Not a lot of people know this but in the 1890s, there were plans to make Blandford Station into a railway junction. Connecting Bath with Poole and Bournemouth, the Somerset & Dorset Railway had already opened stations in Blandford and Shillingstone.

The Wilts, Dorset & East Devon Railway was an ambitious plan to construct a new and additional route from Salisbury to Exeter via Blandford.

The first section of 21 miles would leave the existing Salisbury to Yeovil line at Wilton and open new stations at Broadchalke, Sixpenny Handley and Pimperne before joining the Somerset & Dorset line in Blandford. The second section of 11 miles would run through Blandford St Mary, Winterborne Whitechurch & Bere Regis and then join the London & South Western, Poole to Dorchester line at Moreton Station. The final 50 mile section would be built via Shipton Gorge, Bridport, Charmouth, Lyme Regis, Seaton & Sidmouth and would then join the London & South Western Line at Topsham. From there it would travel the few remaining miles to Exeter.

Plans drawn up by J F Errington Barnes of Dorchester sought to ‘connect the watering-places of Devonshire and Dorsetshire and develop the resources of the district.’ The Western Gazette of 23rd November 1894 reported:

‘The country through which the proposed line will pass is certain to be benefitted, a large quantity of agricultural and dairy produce, at present to be conveyed by road for long distances. The local population amounts to 90,000, and if this is to be added to Salisbury and Exeter, the total reaches about 140,000. The advantages possessed by the project railway are obvious and its construction would be welcomed by the large number of landowners, mill owners, farmers and other traders as well as residents in the localities affected.’

The Wilts, Dorset & East Devon line promised faster journey times between Dorchester & London and between Dorchester & Exeter. This benefit was probably its undoing. For on the one hand it needed the cooperation of the London & South Western Railway to run over its tracks. While on the other hand it was claiming a quicker journey time with a competitor whose partnership it was seeking. The other main West of England company, the Great Western would also have not welcomed a new competitor on its route to Exeter and beyond.