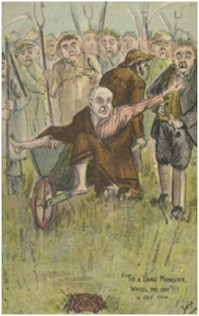 On a Tuesday in October 1706, a travelling Poole fishmonger was wheeling his cart on the outskirts of the village of Shapwick. Unknown to him, a large crab fell from his barrow. This was to cause panic and alarm among the Shapwick villagers. Living inland, and perhaps in the 18th century not having travelled beyond Blandford, the Shapwick villagers had never before seen a crab.

Trudging home and exhausted by his day’s labour, a Shapwick farm worker discovered this crawling creature by stepping on it. So strange was its appearance, he believed it was the devil himself. Running on to the village, he told everyone excitingly of his horrid find. Fearing it was the work of the devil, the villagers armed themselves with pitchforks, sticks and stones. Knowing not what to do, they decided to consult the shepherd Rowe considered by many to be the local wise man. Sadly, the aging oracle was now past his prime and for the last six years had been confined to his bed. The old man was as infirm as he was reckoned to be gifted. So the villagers lifted him into a wheelbarrow and carefully trundled him down along the lane to scrutinise this unknown creature. Upon viewing the unfortunate crab, and with the perspiration of fear on his face, the veteran shepherd cried out, ‘Tis a land monster, wheel me off.  Wheel me off or we’re all dead men!’

Realising his loss, the fishmonger retraced his steps back to Shapwick to try to find his errant crustacean. Upon hearing of the chaos caused, he was most amused. A crowd of villagers starkly warned the fishmonger and one shouted. ‘Take care he’ll bite you, you’ve caught the devil.’ To the astonished folk of Shapwick, the Poole fishmonger simply picked up the monster and placed it into his basket. He, then, continued on his way.

‘You silly fools can it be true
A fish so common you don’t know?
This is a crab caught in the sea
This morning it was lost by me
So many fools upon the green
At one time sure was never seen.’  (The Shapwick Monster – Buscall Fox.)

As he plied his trade travelling around Dorset, so humoured was the Poole fishmonger that he told everyone what had happened. Sadly, this fishmonger’s tale gained Shapwick folk an unfair reputation of being slow-witted. Indeed, it was said that this led to some Shapwick villagers being too embarrassed to visit a fish stall.

The tale of the Shapwick crab survived for many generations. In the 1840s, it was re-told in poetic verse by Buscall Fox who also produced his own mocking illustrations. Some 60 years further on, the village produced an Olympic running champion. Charles Bennett won the 1,500 metres race in the 1900 Paris Olympics. Cruelly, some Blandfordians linked the two by suggesting that Shapwick folk were ‘fleet of foot, but slow of mind.’ How unkind, but of course this frequently retold story could just be a good old-fashioned folklore tale?