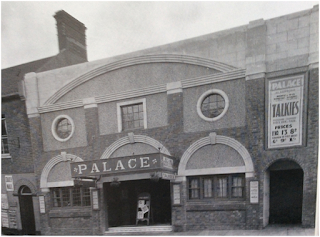 In the 1950s, there were two cinemas in Blandford, the Palace and the Ritz. Both were in East Street and the Palace was immediately facing the Ritz, the latter on the north side of the street. Both were owned and managed by Percy Carter, a former music hall entertainer.

Before the opening of the first cinema in the town, there were the occasional open air screenings put on by travelling showmen. A cinema was first established on the north side of East Street and was called the Palace. All the films were without soundtracks, so Alf Fletcher from Pimperne provided a musical accompaniment on the piano. It is not known when the Palace opened, although in February 1913, there is a newspaper report on whether it had been legal to have shown films in Blandford on Christmas Day. There is also a reference to the Palace, Blandford in the Stage newspaper of October 1912.

In October 1917, during World War 1, the Palace was patriotically showing, twice nightly, a film of British tanks in the Battle of Ancre. While a new owner, Mr Butler acquired the cinema in 1921 with ‘the building being transformed in every way to the comfort of its patrons.’ Takings were between £15 & £16.

In 1927, Percy Carter acquired the cinema, modernised it and re-launched the establishment. Talking pictures would arrive two years later. Then in 1934, he had a new cinema built on the other side of the road. It was designed by Bournemouth architect, E de Wilde-Holding who also designed the Moderne Cinema in Bournemouth and theatres in Wimborne, Chard and Honiton. The new Palace cinema had a balcony which overhung some of the stalls. The old Palace closed as a cinema and reopened as a shop called Carter’s Bazaar. With the re-establishing of Blandford Camp as a military base at the start of World War II, the Bazaar reopened as the Ritz Cinema in 1939. Publicity described the Ritz ‘as modern in design and comfort, fitted with counter-weight tip-up chairs and has the modern form of interior decoration.’ Often, the same programme was shown in both cinemas with films being rushed across the road between intervals.

In 1949, Percy Carter was caught up in excitement that could have occurred in one of his crime films. Large crowbars were discovered in the garden of his house which had been used in a raid on Blandford Post Office. The Post Office was located just next to Carter’s home. Using dynamite, the door of the Post Office safe had been blown open by a London gang and cash and other valuables stolen.

With the rundown in the size of the British Army and the growing attraction of television, the Ritz Cinema closed in 1957. Of the two cinemas, the Ritz was considered to be not very posh by the cinema goers of Blandford. The Palace closed in August 1971 with the screening of a Dad’s Army film – a spin-off from the television series. It was supposed to close for a few weeks so that refurbishment could be carried out but it never reopened.