Which Blandfordian has appeared the most in film and on television? A strong candidate would be Frederick George Abberline, but who was he? Frederick has been portrayed on the big screen by Michael Cane, Johnny Depp and several other leading actors. Clive Russell played him in the BBC’s Ripper Street. Unfortunately, Caine’s portrayal of Abberline as a drunkard and that of Depp as a drug addict were totally inaccurate. However, as Frederick had passed away in Bournemouth in 1929 he was unable to speak up for himself. In fact, and despite looking more like a bank manager, he is justifiably regarded as both a hard working and decent London policeman.

Frederick George Abberline was a Chief Inspector for London’s Metropolitan Police and a key figure in the East London, Jack the Ripper serial killer murders. In a BBC survey, Jack the Ripper was voted as the most evil Briton of the last 1,000 years. After the murder of Mary Ann Nichols, Abberline was chosen in September 1888 to lead the investigation because of his knowledge of the seedy Whitechapel area. He was a portly and balding officer with a thick moustache and bushy side whiskers. Four similar murders followed but the identity of the Ripper was never uncovered. It remains one of the biggest unsolved murder mysteries of all time. The chief suspects were all men, including a member of the royal family, but Abberline always believed the Ripper could have been a woman.

Abberline was born in Blandford Forum in January 1843, the son of Edward and Hannah, formerly Chinn. His father worked as a saddle maker and local government clerk. Frederick trained initially as a clockmaker and was an avid reader of crime novels. These, at the age of 20, probably inspired him to leave for London and join the Metropolitan Police. He was highly ambitious, gained several promotions and by 1890 reached the rank of Chief Officer. In March 1868, he had married Martha Mackness who sadly died due to consumption only two months later. His second marriage to Emma Beamont lasted more than 50 years.

He also investigated the Cleveland Street Scandal and the Irish Fenian explosion at the Tower of London. The former started with apparently thieving telegraph boys and resulted in the alleged involvement of a member of the royal family, the naming of a royal equerry and many others in a rent boy scandal. Frederick retired from the police in 1892 after receiving 84 commendations and awards. He then worked for the Pinkerton Detective Agency and spent some time in the casinos of Monte Carlo looking out for cheating customers.  In 1904, he retired again and moved to Bournemouth. Frederick Abberline died on 10 December 1929 at his home in Holdenhurst Road and is buried in Wimborne Road Cemetery. When he died he had no close family to organise his headstone so he was buried in an unmarked grave. However, in 2007 a local stonemason donated a headstone after a campaign by retired police officers and Ripper enthusiasts. As one of the Metropolitan Police’s finest officers, it is perhaps ironic that Blandford born Frederick George Abberline is best remembered for the case he was unable to solve. 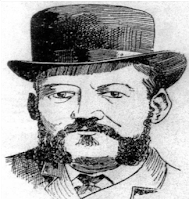 May 18, 2022
Crown Hotel, Blandford is reckoned to be one of Dorset’s oldest hostelries. Yet its most tragic day, during a long history, must surely be when a young chimney sweep lost his life. The chimney sweep, who was just a child, suffocated and was burnt to death in a Crown Hotel chimney which had been alight a little while before. ‘His cries were dreadful and no-one could give assistance. Part of the chimney was taken down before he was got out.’ (Salisbury & Winchester Gazette 27th March 1780) The lad had gone up one chimney and attempting to go down another had become stuck. At the time children were used to climb up chimneys to clean out soot deposits. With hands and knees, they would shimmy up narrow dark flue spaces packed thick with soot and debris. After the 1731 Great Fire of Blandford it was realised that it was important to sweep chimneys regularly while many rebuilt houses had narrower ones. Smaller chimneys and complicated flues were a potential death trap for children. The sw
Post a Comment
Read more