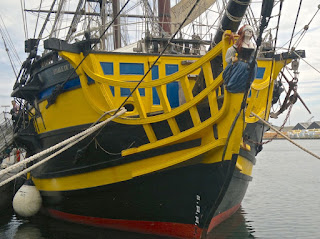 In the history of the British Navy, it appears there were three HMS Blandfords. The first HMS Blandford, launched at Woolwich in 1711, was lost at sea with all hands. The second, launched in 1720 was a trend setter but also had a dark secret. She was involved in the slave trade. While the third HMS Blandford (1741), featured in frequent skirmishes with the French but more recently had a replica built which featured in a television series.

HMS Blandford (1711) served the Royal Navy in the Baltic, North Sea and in the Mediterranean. Sadly, she was lost with all hands including her captain, Erasmus Phillips during a fierce storm in the Bay of Biscay in March 1719.

HMS Blandford (1720) was one of the first of a class of 22 vessels to be built to a common standard. This resulted in cost savings in both the building and maintenance of the vessels. It also provided greater certainty as to how they performed at sea. Her first captain was William Martin who eventually became an admiral. After more than 20 years service in the Royal Navy, Blandford (1720) was put up for sale. New owner, Bristol based James Pearce refitted the vessel and entered her into the transatlantic slave trade. During its refit, two ventilators were added to the lower deck to increase the airflow for some 400 to 500 slaves who would be crammed into the lower decks. Under Captain John Brackenridge, HMS Blandford would have taken part in a triangular trade. English goods would be traded for slaves in West Africa who would be taken across the Atlantic and then traded for local goods to take back in England. Of the 468 slaves forced aboard during Blandford’s first and only known slavery voyage only around 400 survived to be landed ashore in Kingston, Jamaica. Upon Blandford’s return to England in June 1745, she was put up for sale. The vessel was sold in Lloyd’s Coffee House in Lombardy Street, in the City of London by broker, Samuel Brooks. Who was the purchaser in July 1745 and how her future unfolded is not known. However, it is known the town of Blandford Massachusetts in the USA is named after her.

HMS Blandford (1741) was launched in October 1741 and her first master was Captain Robert Young.  The vessel had a crew of 140 officers and crew and was a 20 gun frigate. She served in home, Caribbean and American waters for 20 years. Her Royal Navy service was eventful and in the 1740s she captured three French vessels. While a 1745 manuscript reported on a less fortunate experience for the vessel.

‘HMS Blandford has had the misfortune to fall in with a squadron of seven French sails between Gibraltar and Lisbon and was sent to Brest. The captain (Edward Dodd)) was threatened with being hanged if he did not discover to the Commodore whether there was an English squadron at sea. This he bravely refused to comply with.’ HMS Blandford was later released from her French captivity.

Penhallow Cuming was made her captain in March 1857 and was a thoroughly bad officer. Two years later, he was dismissed from the Royal Navy for cruelty. He would flog seamen who did not immediately report from all quarters when ‘all hands on deck’ was called. Vessels such as the Blandford (1741) were the workhorses of the British fleet performing escort duties and also providing support for amphibious landings. After Royal Navy service, HMS Blandford was paid off in Plymouth in 1763 and sold for ££305.

The ship’s carpenter and boatswain found alternative work in Plymouth dockyard. In 1996 a replica vessel was built in Turkey greatly inspired by HMS Blandford. She was constructed for the television series about the British naval officer, Horatio Hornblower. Then, a French company bought her and renamed the vessel Étoile du Roi. So after HMS Blandford (1741)’s many skirmishes with the French it is ironic that the modern day replica is now in French hands!

May 18, 2022
Crown Hotel, Blandford is reckoned to be one of Dorset’s oldest hostelries. Yet its most tragic day, during a long history, must surely be when a young chimney sweep lost his life. The chimney sweep, who was just a child, suffocated and was burnt to death in a Crown Hotel chimney which had been alight a little while before. ‘His cries were dreadful and no-one could give assistance. Part of the chimney was taken down before he was got out.’ (Salisbury & Winchester Gazette 27th March 1780) The lad had gone up one chimney and attempting to go down another had become stuck. At the time children were used to climb up chimneys to clean out soot deposits. With hands and knees, they would shimmy up narrow dark flue spaces packed thick with soot and debris. After the 1731 Great Fire of Blandford it was realised that it was important to sweep chimneys regularly while many rebuilt houses had narrower ones. Smaller chimneys and complicated flues were a potential death trap for children. The sw
Post a Comment
Read more