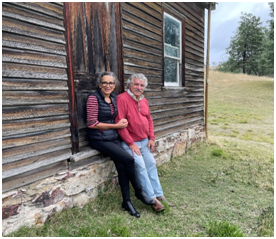 Ria and Bill Bleathman are descendants of Richard Bleathman who, with George Long, were condemned to death by Judge Stephen Gaselee in Dorchester for their involvement in the 1831 Blandford riots. Bill Bleathman is the retired Director of Tasmania’s Museum and Art Gallery while Ria is a management consultant and company director.

Both Bleathman and Long were found guilty of damaging the property of Blandford lawyer, George Moore following the declaration of the result of a Dorset by-election. Many old Blandford records were lost in the disturbance and others that were recovered were found stained with horse manure. Moore was a political agent of the successful candidate, Lord Ashley who was strongly opposed to extending the right to vote beyond a small number of eligible property owners. Bleathman and Long believed that Moore had used confidential client information to prevent political opponents from voting in the by-election which Ashley narrowly won.

Following protests from both Blandford and Sturminster Newton and petitions, the judge wanted to prevent any further social unrest. He changed the decision to transportation to Van Diemen’s Land, now Tasmania, for life. Both Bleathman and Long spent time in the convict hulk, Captivity berthed opposite Devonport Dockyard. While waiting to be transported to Australia they were put to work as dockyard labourers. Captivity was previously the Royal Navy vessel, HMS Bellerophon on which Napoleon Bonaparte had surrendered.

In time both Bleathman and Long obtained their release. Richard became a farmer, married twice and had a large family. George Long found work as a sailor on a sailing vessel which journeyed between the Australian mainland and Van Diemen’s Land. Sadly, George Long lost his life in an accident when he fell into the ship’s cargo hold when it was berthed in Melbourne.

Prior to the 1988 Australian Bicentenary, few Australians would admit to having a convict as an ancestor. It was known as the ‘stain’. Now that there is a better understanding of some of the injustices of the convict system it is ‘du rigueur’ to have a convict in the family tree. Ria Bleathman recently said,

‘My father’s ancestor was one of the so called Dorset rioters and was transported as a rioter, in the 1830s, for the term of his natural life. He was effectively a “political prisoner” and therefore Convict Royalty.’