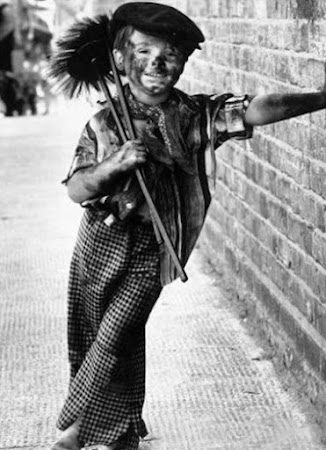 Crown Hotel, Blandford is reckoned to be one of Dorset’s oldest hostelries. Yet its most tragic day, during a long history, must surely be when a young chimney sweep lost his life. The chimney sweep, who was just a child, suffocated and was burnt to death in a Crown Hotel chimney which had been alight a little while before.

‘His cries were dreadful and no-one could give assistance. Part of the chimney was taken down before he was got out.’ (Salisbury & Winchester Gazette 27th March 1780)

The lad had gone up one chimney and attempting to go down another had become stuck. At the time children were used to climb up chimneys to clean out soot deposits. With hands and knees, they would shimmy up narrow dark flue spaces packed thick with soot and debris. After the 1731 Great Fire of Blandford it was realised that it was important to sweep chimneys regularly while many rebuilt houses had narrower ones. Smaller chimneys and complicated flues were a potential death trap for children. The sweep master would take on homeless boys or from destitute parents and would teach a young child the trade. Chimney sweeps, also known as climbing boys, often died in adolescence from what was known as chimney sweep cancer. This was an aggressive form of testicular cancer commonly known as ‘soot wart’ or ‘sooty balls’. A boy sweep would be lucky to see his fortieth birthday.
Things finally changed with the passing of the Chimney Sweeping Act of 1875 whereby the Police had to regulate the employment of children as climbing boys. A classic piece of English literature, the Water Babies written by a former Pimperne clergyman, Charles Kingsley had helped to bring to an end the tragic use of young boys as chimney sweeps. Kingsley's chimney sweep in the novel, Tom is reckoned to have been inspired by James Seaward, a real life sweep. Looking back on his early life, Seaward said:
'I have known what it was to have straw lighted under me and pins stuck in the soles of my feet to force me up a chimney: and I have known too what it was to come down with blood and soot and climbing with my knees and elbows.'
There has since been one report of a guest at the Crown Hotel in Blandford seeing a sweep’s flat cap and waistcoat in a fireplace close to where the young boy perished! 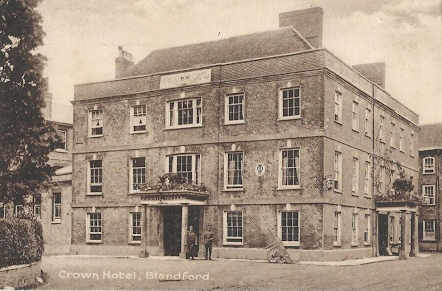